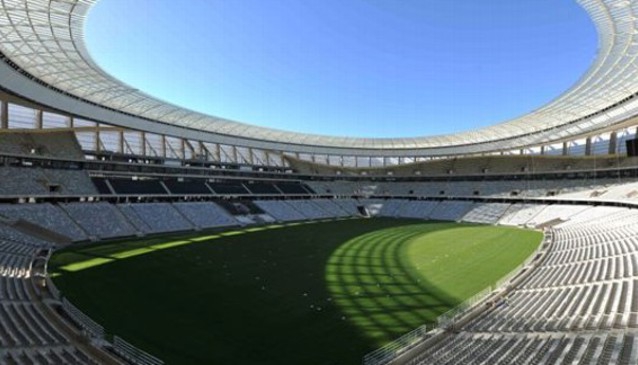 Cape Town Stadium, known as the Green Point Stadium before and during the world cup, is a world class 68 000 seater venue. It played host to 8 of the FIFA® World Cup games including the semi-final game.

The design includes a woven mesh of fibreglass/Teflon material that covers the sides and allows natural air flow - and a 16mm glass bicycle-wheel shaped roof. These both allow for a significant number of the spectators to stay dry in rain storms, and the players not to have to play in the vortex of wind that is a common problem with other stadiums.

For the 8 World Cup matches the stadium seated up to 68 000 fans, while 13 000 of those seats have since been removed. The streamlined design allows for the stadium to be evacuated in 15 minutes, and spectators will monitored by a state-of-the-art camera surveillance system, both adding unprecedented safety to spectators. There is also an on-site police station at the Cape Town Stadium.

The design of the stadium definitely honours Cape Town’s skyline – and the design compliments beautiful Table Mountain and the V&A Waterfront. The stadium lights at night are truly spectacular - and resemble a rose coloured bowl with light emanating from the centre.

Although built specifically for the 2010 World Cup, Cape Town Stadium was designed with a long-term vision, and will play host to a variety of events over the coming years. These include live concerts and productions, various sporting and cultural events. For a full listing of events taking place at this venue, visit the Events page.

The stadium is also open to the public for guided tours, and bookings can be made using the contact details above. Tours cost R60 for adults, R30 for children and pensioners, and R10 per child for school groups.