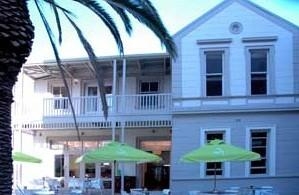 Café or Bistro or Deli

Over recent years, Greens has built up a sound reputation in locations throughout the Cape, with a popular branch in the heart of the Southern Suburbs. They subsequently the City Bowl, and are now situated on Park Street, just a stone's throw away from the vibey Kloof Street.

There are no surprises at Greens Gardens for those familiar with the brand, as they continue to offer the familiar calming atmosphere combined with the modern décor finishes that have established them as such a popular venue over the years. Greens is situated in a registered building that was previously served as an inn, and as such the interior has been meticulously renovated to highlight and retain the most impressive features of the building. These include the spectacular pressed ceiling in the main dining area. There is also a traditional fireplace providing warmth during winter months, and when you consider the old world charm with the new design elements, it makes for a truly unique restaurant setting.

Food at Greens is simple yet tasteful, and they provide a menu that caters to many tastes and requirements. This, along with the trendy bar, have made it a popular go-to location for Cape Town's hippest, and setting it up as the perfect starting point for a night on the town, either around the corner on Kloof Street, or a little further into town on nearby Long Street.