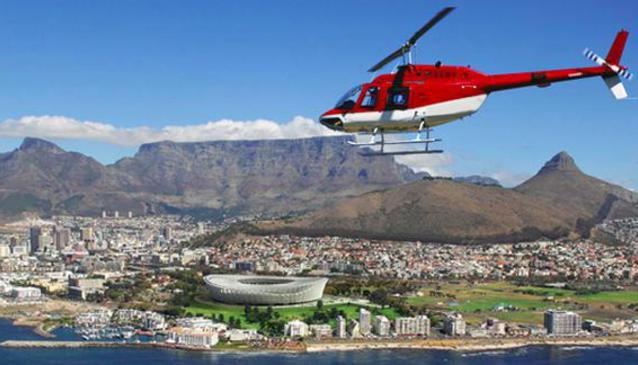 There's simply no better way to experience Cape Town and its surrounds than with a helicopter flight over its spectacular sights, and Cape Town Helicopters is one of the city's best operators.

Flights with can now be booked via the Cape Town Helicopters website.

From high in the sky you will be treated to the best of Cape Town, which, depending on your route, will include breathtaking views of Table Mountain, Robben Island, the V&A Waterfront, Cape Town Stadium, the entire Atlantic Seaboard, Hout Bay, Chapmans Peak, Cape Point, False Bay, the Southern Suburbs, the University of Cape Town, and the Cape Town City Bowl. Whether you've lived in Cape Town your whole life, or are just in town for a few hours, this is one of the top things to do in Cape Town.

With a variety of routes and options available there's something to suit most budgets and timeframes. These include brief Hopper Flight (Cape Town Stadium, Clifton, Camps Bay and 12 Apostles); the longer Atlantico (Cape Town Stadium, Clifton, Camps Bay and the Twelve Apostles, Hout Bay and Chapman's Peak); the stunning Two Oceans (V&A Waterfront to Hout Bay, Chapman's Peak, and over to False Bay and the Southern Suburbs); and the big daddy of the Full Peninsula tour, which takes you all the way to the dramatic cliffs of Cape Point and dozens of beautiful attractions along the way.

Cape Town Helicopters has a superbly maintained fleet of choppers piloted by the country's best. Quite simply, this is an experience you won't forget, and will definitely be coming back to for more.

For great value, get the combo deal with City Sightseeing, and take in the views from up in the air and down on the ground at a superb price.