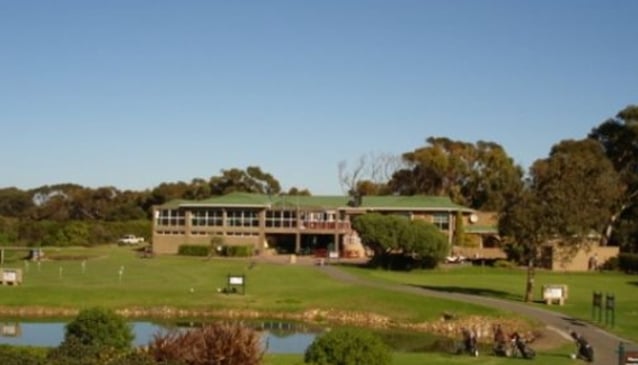 The new Strand Golf Club opened in 1994 after being relocated from the old course on Gordon's Bay Road (where Greenways Estate is now). The new championship layout proves an exciting challenge for golfers of all abilities.

In the intervening years, the course has matured

greatly and a feature has been the attention given

to the manicuring and maintenance of the surrounds. This is immediately noticeable from the upstairs terrace of the modern clubhouse as you look over the finishing hole and the sparkling water features with the beautiful Hottentots Holland mountains as backdrop.

The prominent features of the course are the abundant water hazards and bunkers, undulating greens and tree-lined fairways. Many of the holes on the back 9 play in semi-links style.

The Club was also awarded by the Complete Golfer as 'The Most Improved Course in the Cape for 2007'. An award of which the members are enormously proud.

The Strand Golf Club has been known for its greens over the years which have provided an excellent putting surface. There are several tee boxes (championship, club, senior and ladies) on each hole, which makes for approximately five hundred metre difference between championship tees and club tees over the 18 holes. In 1994, two and a half thousand trees were planted on this course and they are now becoming very much part of play.

The course is situated adjacent to the popular holiday coastal town of the Strand. This area is famed for its long stretch of unspoilt beach.

Club facilities include Halfway House, Upstairs Lounge with Bar, Terrace with beautiful views, Pool Table & Dart Board. There is also a bar downstairs in the Halfway House.