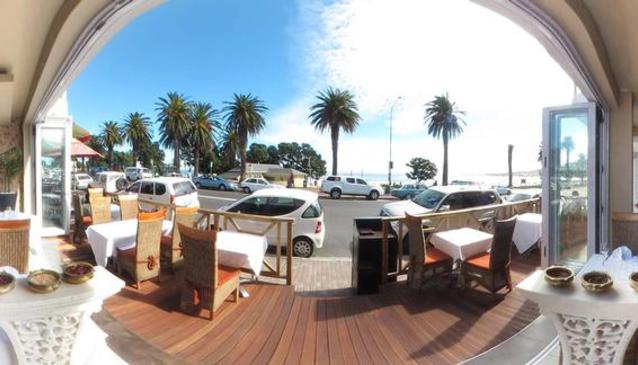 The Raj Indian Restaurant along the world-famous Camps Bay strip embodies the elegance of the British colonial style peculiar to India, the wonderful tastes of North Indian cuisine, and the vibe and atmosphere that envelopes this unique part of the Mother City.

The cuisine at the Raj is mostly North Indian, and the culinary styles featured are Bhoona, Tikka Masala, Vindaloo and Khorma. Southern styles – like the seafood cooking styles from Goa are also incorporated into the menu.

The master chefs at the Raj Camps Bay use an authentic Tandoor oven which heats to temperatures of 400-450 degrees to prepare their Naan bread, Chicken Tikka Masala and various other dishes too. The chefs can also be spotted whirling and twirling Roomali Roti with dexterity and skill through the glass wall at the corner of the restaurant.

This is Indian food at its best, and perfectly located with some of the best views in Cape Town.

Take a look at the full virtual tour under the Multimedia tab above to see the spectacular views and layout of the Raj Camps Bay. Use the Enquiry form below to find out more or to reserve a table directly.

You can still get your Raj fix when you're not in the Cape Town region by visiting one of their other national branches, including at Monte Casino, Crowthorne, Michelangelo Towers, and Rivonia Junction, all in Johannesburg, the Windmill Casino in Bloemfontein, and the spectacular Raj located in the main casino at Sun City.