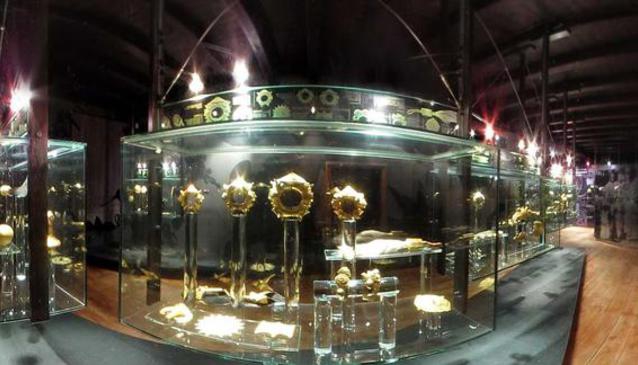 Directions to Gold of Africa Museum

The Gold of Africa Museum, located upstairs from the popular Gold Restaurant, houses thousands of years of legend, ritual and craftsmanship displayed in the world’s most comprehensive collection of surviving artefacts from the gold-rich kingdoms of Africa.

The power and wealth of these kingdoms is a little easier to comprehend once these exquisitely crafted objects have been viewed. But the collection goes a step beyond the aesthetic. The visitor takes away vital insights into the values of the people who created these objects through the symbolism surrounding each piece.

The collection was originally assembled by Swiss art lover, Josef Mueller, who collected African artworks and jewellery over a fifty-year period. Josef’s daughter and son-in-lawer, continued to build the collection, which was displayed in Switzerland’s Barbier-Mueller Museum until 2001 when it was returned to the African continent.

AngloGold-Ashanti, one of the world’s largest gold mining company, took custody of the collection, providing the perfect setting by restoring one of the oldest colonial homes in South Africa. Built in 1783, Martin Melck House is believed to be the finest remaining examples of old Cape Town domestic architecture. Its beginnings also coincide with the rise of the Akan Kingdoms that created many of the objects within the museum’s collection.

The links between African royalty, gold and power first become apparent through colourful photographs and wall murals. Dominating the museum’s hall is the image of a queen mother in gold finery, complete with gold mesh spectacles. Adoption of western-style glasses provided a novel solution to an age-old problem: how to prevent ordinary people looking directly into the eyes of royalty; dangerous since they might be blinded by the power of divinity beaming from the ruler’s eyes.

Upstairs is housed one of the largest and most beautiful collections of African gold artefacts in the world. Life-size pictures chosen to offer spiritual protection for the collection hang at the top of the staircase while objects of intricate beauty vie for the observer’s eye with symbols of power, artfully suspended in this chamber of shadows.

The walls of an interleading room are covered by a time line first used in Europe at the end of the 19th century. Below, a second line displays stories of gold and gold trade in Africa over thousands of years.

Leading from the map room, the visitor encounters a stone-layed wall: a reconstruction of the stonework found at Great Zimbabwe where an estimated 15 to 25 million ounces of gold were mined. The walls are constructed from sticks using traditional techniques and are typical of African cattle enclosures. It is in this room that pieces from southern Africa offer a glimpse of the majesty of these ancient cultures.

Perched above the collection is one of only a few surviving ‘dakkammers’ or attic rooms, now a lair for the golden lion; symbol of royal authority, courage and strength.

A state-of-the-art gold jewellery workshop is the scene of courses and demonstrations. Here visitors can see local goldsmiths using South African gold to design and manufacture exquisite pieces of jewellery. Some of these pieces are sold in the museum shop that offers a variety of exclusive gifts crafted by local workers. After basking in the beauty of the gold collection, visitors may well wish to take a little of its magic away with them.

The Gold Museum is located on Strand Street, in the Cape Town CBD, and is designated stop on the City Sightseeing bus route as well.