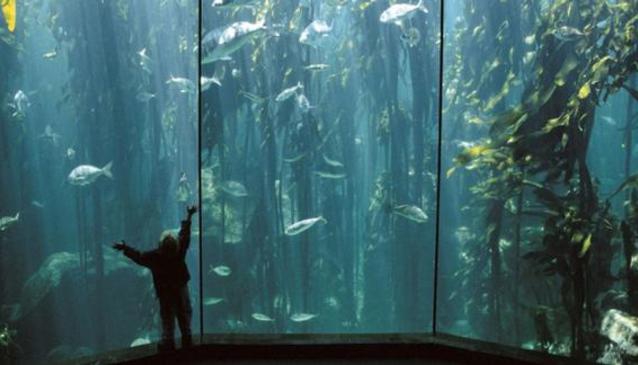 The Two Oceans Aquarium at the V&A Waterfront in Cape Town provides a beautiful look at life under the sea. There is a tank dedicated to the kelp forests found in the cold Atlantic ocean surrounding Cape Town, and there are tanks full of colourful fish and creatures from many other oceans as well.

There are sea horses from Knysna, clown fishes (Nemo and his family!) from the Great Barrier Reef, Giant Crabs from far below the ocean, sharks, penguins, turtles, luminous jelly fish, sting rays, moray eels and even frogs.

The Sappi River Meander display takes the form of a river that falls from a waterfall on a mountainside, then becomes a river, flows into a small lake and flows to the ocean where the penguins are.

Right next to the outdoor penguin pool is the Afrisam interactive children’s play area. Kids can draw, paint and play right after their minds have been stimulated by all the new sights and sounds. The atmosphere here is full of excitement, laughter and play. A puppet called Peter the Penguin even takes their learning and fun experience a little further and leads the kids in song.

The I&J predator tank is filled with all sorts of carnivorous fish, and feeding time here – normally at 3pm - sees the divers feed them from inside the tank. This is an amazing display for adults but it is just awesome for the kids. Sharks, turtles, sting rays and two divers feeding them!

Two Oceans Aquarium at the Waterfront is open every day of the year from 09h30 until 18h00.